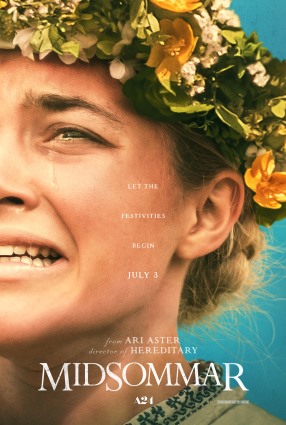 I don’t know that I necessarily saw this coming but the “A24 horror film” has somehow become something of a filmgoing institution.  These are horror movies that are noticeably artier and more intelligent than what cinema-goers are normally used to and critics love them.  However, as a byproduct of these being horror enough to play in normal theaters they also bring in a lot of audiences who expect their genre fare to offer simpler pleasures and as a result they end up getting really low “Cinemascores” (which are like these exit-poll things that are done by a research company and are considered important by Hollywood insiders) and end up getting these hilariously clueless user reviews in places like IMDB and RottenTomatoes.  Honestly I think this critic/audience disconnect is a bit overblown, it’s basically just the result of a cadre of people who were never really in these films’ audience in the first place also tagging along and not knowing how to process what they’re being given.  The main movies in this trend have been Robert Eggers’ The Witch, Trey Edward Schults’ It Comes At Night, and Ari Aster’s Hereditary, and while Hereditary was the last of these films to come out its director was the first of the three to have a follow-up come out.  That new film, Midsommar, is opening this week on 2707 screens and should lead to some rather interesting audience responses.

Midsommar begins with something of a prologue set somewhere in the United States during the middle of winter.  Here we’re introduced to Dani Ardor (Florence Pugh), a psychology student who’s struggling with a troubled sister and a fairly shaky relationship with her boyfriend Christian Hughes (Jack Reynor).  Christian and his friends are planning a trip to Sweden in the summer to visit the home village of his friend Pelle (Vilhelm Blomgren) which lives a traditional lifestyle and still engages in centuries old rituals during festival times, which is of great interest to Christian and his fellow anthropology student Josh (William Jackson Harper) and of course European decadence is also very much of interest to his other friend Mark (Will Poulter).  After a tragedy occurs Christian decides to invite Dani along to get away from it all, but it could soon become clear that they aren’t exactly sure what they’re in for.

Despite what Cinemascore might suggest I do think Hereditary ended up pleasing standard horror audiences more than some of the other A24 horror films.  It grossed more at the box office than the other two films and I’ve generally heard fewer anecdotes about dumb people being “bored” by it.  I think that’s because, in its last third, the film does start to deliver on some of the more conventional scares that people are looking for.  That in many ways seems to be what may set Ari Aster apart from someone like Robert Eggers; even when he’s making a horror film in his own idiosyncratic ways he does know how to throw the horror audience a bone.  In this film that bone is probably the set of characters he’s assembled, who do roughly fall within the usual trope characters even if they feel richer than usual.  Dani might not be a virgin but she still has plenty of “final girl”-isms, Christian certainly seems like the jock boyfriend who ultimately won’t be able to protect her, Josh is the “smart one” who knows a lot about the sub-theme, and Mark is the boorish party dude who acts as comedy relief.  The film manages to challenge some of these tropes without self-consciously subverting them but it isn’t afraid to exploit them just the same and is surprisingly funny at times in the way it depicts the interplay between some of these guys.

The other big connective tissue between Midsommar and Hereditary is that both films are in many ways movies about mourning and feature characters who are just recovering after experiencing a loss that makes them rather emotionally vulnerable right from the jump.  Also, in much the way Hereditary basically shows the dissolution of a family as a result of both grief and supernatural shenanigans, Midsommar explores the toll of both a loss and horror scenarios on a relationship.  Dani and Christian are two characters who are established as being pretty close to the end of the road already as the movie opens, with Christian’s friends establishing that he’s been planning to break up with her for reasons that seem cruel but understandable.  Dani is shown to have been someone who’s gone through a lot even before her family tragedy and that she’s been a handful and a half and that Christian has been at wits end and that he’s on some level been staying in the relationship out of a sort of uncertain pity.  Christian knows this, the audience knows this, but Dani does not necessarily know this and that kind of establishes for the audience that they’re about to be metaphorically watching a car crash in slow motion and the rest of the movie can almost be viewed as a sort of operatic manifestation of how this kind of breakup can go wrong in the most extreme of ways.

Of course this is a horror movie, or at least it poses as one.  The obvious reference-point for all of this is obviously Robin Hardy’s 1973 film The Wicker Man, which is about a similarly paganistic commune which may or may not be sinister in its adherence to “the old ways.”  Like that movie it doesn’t necessarily try to be “scary” at all times and instead gains power by exerting a sort of quiet threat at all times.  In fact a lot of what makes the movie so appealing in its paranoia is the way the characters are constantly having their survival instincts over-ridden by the hospitality of these cultists, who have this uniquely Swedish way of seeming completely reasonable and inviting no matter what they’re saying.  Where the film may lose some people is that, outside of a couple of gory moments thrown in, the horror in the film is generally left at an intentional simmer rather than brought to a boil.  Though it goes into some fairly transgressive places towards the end it isn’t necessarily leading to anything as viscerally exciting as the finale of Hereditary.  Rather, the film’s finale is almost more like a really, really, really dark joke rather than a thrilling chase in the dark and that could be a bit polarizing.

At the end of the day, Midsommar is built to be a niche genre movie… the Swedish title probably should have been your first clue there.  It’s a film that’s uncompromising, it’s got a long running time, it takes its time, it will gross out people who come in expecting it to be The Conjuring, and it just generally behaves different from mainstream horror movies (even more so than Hereditary).  That it’s opening wide will maybe lead to the same pattern of critical acclaim and fan backlash that we’ve seen before… but maybe it won’t.  Maybe if A24 keeps putting out interesting product like this the right audience will continue to catch on and the people who aren’t equipped to enjoy them will increasingly stop showing up expecting the wrong thing.  As for this one, well, even as someone very interested in what it was doing I will admit that this is pushing the limits of how long a horror movie can go without really trying to be conventionally scary and as such I probably preferred Hereditary on a whole.  But maybe that’s a sacrifice worth making in order to see what Ari Aster can do when he’s really allowed to just go nuts.