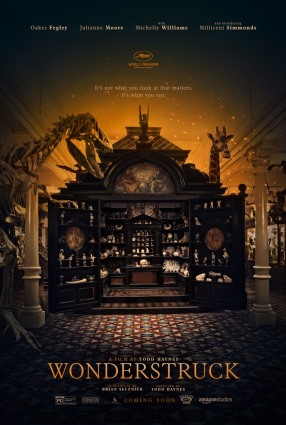 While I like to stay focused on movies themselves when talking about them, there do occasionally arise certain situations where distractions happen while watching movies that I feel obligated to disclose.  In this case I had the odd experience of showing up to a movie I barely knew anything about to find that it was playing subtitles at the bottom.  These were not subtitles translating a foreign language as the film’s spoken dialogue is in English, rather these were captions intended for the deaf and hard of hearing which transcribed every word of dialogue and also described all the sound effects and music ques.  They were annoying.  Really though my distraction had less to do with the captions themselves so much as my confusion as to why they were there.  Had I accidentally walked into a special screening of this intended for the hard of hearing?  Should I have waited for the next screening?  Why wasn’t I told ahead of time this was a special screening?  Or did the film’s director, Todd Haynes, actually intend for the film to have these caption given that it turned out to be a story about deaf people?  Doing research after the fact I took another look at the theater’s website I discovered that they were in fact turning on these “open captions” for every screening of the film, possibly in response to an online petition that is demanding that theaters do so.  It’s a fact that they apparently saw no need to alert their customers to outside of some fine print next to other “amenities” like reserved seating.  Some simple notice that this was going to happen would have gone a long way toward letting me just relax rather than stewing about this during the first act of the movie.

The film follows two children who live in two different times and places and whose fates seem increasingly intertwined as the film goes on.  The first is a boy living in the Midwest circa 1977 named Ben (Oakes Fegley) whose mother has recently died and has a burning desire to track down his long lost father.  When fate intercedes in the form of having him struck by lightning and left deaf he decides to take matters into his own hands and run away to New York City in order to follow a lead that could help him find his father.  This is intercut with the story of Rose (Millicent Simmonds), a young deaf girl living in New Jersey circa 1927.  This girl has never been taught sign language and her father seems to have very little patience with her.  Eventually this reaches a breaking point and she runs away and boards the ferry to New York City in hopes of finding her favorite silent film star Lillian Mayhew (Julianne Moore).  Both characters paths lead them to the American Museum of Natural History and specifically an exhibit there called a Cabinet of Wonders where a souvenir book called “Wonderstruck” is sold.

Wonderstruck is based on an illustrated juvenile novel of the same title by Brian Selznick, who also wrote the book that Martin Scorsese’s Hugo was based on.  Selznick apparently has some pretty strong interests because there are definitely some commonalities between the two.  Both works seem to have an interest in silent films, both are about children, both have a sort of whimsical magical realism at their center, and both are very interested in fate resolving wrongs and reuniting people.  Let’s start with the silent film thing.  Early on in the 1927 section we see the deaf girl go to the movies and watch a fictional silent film and upon leaving the theater see a sign advertising that the theater is about to install a sound system and begin playing “talkies.”  This may have been the inspiration for the whole captioning thing at my theater and the fact that one more comfort is being taken away from her acts as a reasonable catalyst for her trying to run away.  It also serves a purpose to bring up silent film during this section because the scenes in 1927 take on a lot of the language of silent cinema.  The dialogue and sound effects in these scenes are dropped in the film to mimic the character’s affliction, but the non-diegetic musical score persists.  The sections are also in black and white and many of the actors do take on the somewhat exaggerated pantomime associated with silent cinema.  The scenes are not, however, a complete recreation of 1920s film style along the lines of something like The Artist and certain more modern techniques do persist.  There are no title cards in these scenes and the film maintains its widescreen presentation and continues to use camera-work that is 21st Century in nature.

That silent film style is pretty cool and the movie’s look at late 70s New York in the other sections is also pretty well rendered.  Todd Haynes certainly directs the film well and it’s generally pretty enjoyable to watch in the moment and up until the moment it ended I thought it was a pretty good piece of work.  However, I was not satisfied by the film’s ending and the more I thought about it the more I think the problems that led to be underwhelmed were baked into the film’s entire plot.  Central to the film is some sort of magical force that’s driving its characters to reunite at the end.  The magical force gives Ben the clues he needs, seemingly provides him a guide in New York, and even has him struck by lightning to spark his journey.  The film surrounds this magical force with whimsy and clearly sees it as a benevolent force setting fate into motion, but if you think about it this magic causes way more harm than good.  For one thing, the film couches Ben’s decision to run away from what appears to be a perfectly loving aunt in a whole lot of romanticism and then has seemingly no regard for the panic that Ben’s little runaway adventure is probably causing back home.  That’s perhaps forgivable given the film’s point of view but it becomes more and more clear that this “amazing” revelation the film is leading towards is not worth all the trouble that this divine intervention is causing.

At the film’s end Ben does not get his hearing back and is disfigured seemingly for life and his aunt presumably worried sick, and for what?  For his trouble he learns about a grandmother he was never looking for, gets a friend he probably won’t be spending much time with once he returns home, and I guess he can say he had an adventurous week in New York when he was a kid.  Did he need to be struck deaf by fate in order for any of this to happen?  I don’t see why.  The fact that he didn’t know who his grandmother was in the first place is odd, the film doesn’t give a particularly good explanation why this is meant to be some hidden secret.  What’s more there’s no particular reason why Ben couldn’t have come to this revelation in a less dramatic way.  There’s no real time limit on finding out who his father is and we aren’t given much of a reason why his aunt couldn’t just bring him to New York to find this bookstore instead of having to be sparked into running away to do everything on his own.  A lot of this isn’t readily apparent, firstly because the film’s supposedly happy ending arrives abruptly before Ben returns to his previous life having been permanently disfigured in order to learn some things that won’t really affect him in the grand scheme of things, and secondly because we as the audience get answers to questions that we have and are thus probably more satisfied by everything than the people who actually need to live with the consequences of all this should be.

Having said all that I don’t want to be completely dismissive of Wonderstruck even if I think the story is kind of daft.  The 1927 sections in particular are worth watching even if it sort of peters out towards the end.  The film also employs some interesting techniques involving puppetry and panorama towards its ending to explain a lot of the backstory in a way that doesn’t feel like an exposition dump and almost distracts form the aforementioned story problems.  This is of course nominally a family movie, which perhaps complicates how it’s assessed.  If you weigh it against some of the other movies aimed at that audience it is noticeably more artful than the competition despite its problems and some of its flaws might not be as apparent to younger audiences who might buy into the film’s whimsy rather than see it as a strange crutch.  However, when compared against other Todd Haynes films or against the movies that Todd Haynes films are usually compared against.  There are definitely worse movies to see than Wonderstruck, but I still can’t forgive it for its occasional laziness or for its ultimate pointlessness.