I’m generally used to knowing months in advance what movies are worth looking forward to but every once in a while something will come out of nowhere and surprise you, and that’s more or less what happened with Lorene Scafaria’s Hustlers, which tells the true story of a group of exotic dancers who form a gang of sorts which starts drugging and robbing various customers in order to “get theirs.”  In some quarters the film was being sold as a sort of economic revenge romp with women nobly fighting back against their opressors, which is not necessarily something I would have gotten behind, but the actual movie exists in a more morally nuanced place than that.  In essence the film is another entry in the much imitated formula established by Goodfellas in which we sort of watch a criminal enterprise as it rises and then falls, and while this is familiar I do think this movie iterates on the format enough to avoid simply being derivative.  Where it loses points is in the aesthetics.  The movie’s never quite sure whether it wants to be straight-up gritty or whether it wants to go for more of a flashy style in keeping with the Scorsese films that inspired it.  Some of the reviews for this thing have been a bit over the top, I think it’s been the beneficiary of lowered expectations, but it is a quality film that will connect with certain audiences very strongly. 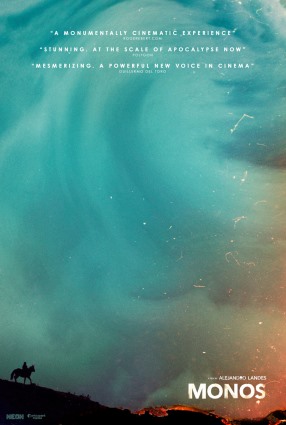 There’s been some quality cinema coming out of Columbia as of late and their submission for this year’s iteration of the Best International Feature category at the Academy Awards suggest that Ciro Guerra is far from the country’s only filmmaking talent.  Monos is set in a remote region of the country and follows a group of teenagers who are enlisted in a paramilitary group called only “The Organization” who I assume are meant as a fictionalization of real life groups like FARC.  This band of The Organization is largely left to its own devices with only one adult commanding officer who only visits them every once in a while to deliver orders.  These kids carry around assault rifles and occasionally engage in drills but do not seem to be very involved in frontline combat, instead their main duty is to guard an American woman that The Organization has kidnapped and is holding hostage, presumably until a ransom is paid.  Much of the tension of the film is in seeing these young people reacting to this extreme situation while still very much being teenagers who are prone to the same kind of irresponsibility as teenagers who live less stressful lives.  The film sports some really nifty cinematography and has a lot of great scenery and environments and things do get rather exciting towards the end when tensions boil over and “Lord of the Flies” is directly invoked but the film meanders a bit in the middle.  The cast is generally quite good but the size of the film’s ensemble sometimes works against it as we never manage to really know any one of these kids all that well and the film never gets into how they found themselves in this situation or what keeps them there.  It’s an interesting piece of world cinema, but I wouldn’t call it a “must see.”

I was not expecting much from Gemini Man, which is an odd thing to say from a movie directed by Ang Lee and featuring a major star like Will Smith, but the trailer really looked awful and the film’s Rotten Tomatoes score is very low.  I had pegged Lee’s continued obsession with high frame rate presentation as the thing that was probably going to torpedo the movie, which was by all accounts the thing that killed his last film Billy Lynn’s Long Halftime Walk.  My first (and until now only) experience with high frame rate presentation was from seeing The Hobbit: An Unexpected Journey in 60 fps back in 2012 which, ironically enough, was a film I saw on the very same day I saw Ang Lee’s Life of Pi which is likely the movie which convinced Ang Lee that he should be a technological innovator in the first place.  That viewing of that Hobbit movie was, in many ways, one of the worst theatrical experiences I can remember and I spent most of the movie wishing I’d just seen it in a regular theater (or not seen it at all, frankly).  If any movie was going to be a terrible showcase for the technology it was going to be that one since it invited an apples-to-apples comparison to the previous Lord of the Rings movies and because its medieval fantasy setting invited a certain traditionalist approach.  I could tell that the 3D was a little smoother than usual but that was a movie that probably shouldn’t have been in 3D at all and the drawbacks to the format like the fact that it makes everyone on screen look like they’re moving at something like 1.25x speed at times and that it gives the whole film a sort of sterile look like you’re watching a British soap opera or something.

So it was with some surprise that the thing I dreaded most about the film, the tech, was the thing I ended up being most interested by.  I don’t know if the difference between 60 and 120 frames was the difference or if the technology has just gotten better in the last seven years or if the movie was just significantly more suited to it, but the presentation was way more intriguing this time around.  I say “intriguing” and “interesting” rather than “good” because for me the jury is still very much out on this and there are only a limited number of movies I’d actually want it used for, but this time around I did finally kind of see why filmmakers like Lee, Jackson, and Cameron were chasing this technology.  The 3D in the movie seems a lot deeper than what you usually see from 3D movies and you really seem to see the characters and a lot of detail right down to every pore on their face.  It almost looked less like a movie and more like some kind of VR video game experience, which is both a good and a bad thing.  The movements of the characters is still unusual, you don’t notice it this the whole way through but every once in a while some of the onscreen movement will just seem unnaturally faster than what you expect in movies, but during certain action scenes this actually ramps things up.

Now I’ve talked almost exclusively about this film’s presentation technology to this point because it is frankly the most interesting aspect of what is otherwise a painfully mediocre Bourne Identity ripoff movie.  As I’m sure most are aware, the big high concept here is that it’s a movie where Will Smith is an assassin who has to face off against a younger version of himself who is presumably a clone.  That is of course its own technological challenge as they’re using de-aging technology to bring this younger Will Smith to life, and the do a reasonably acceptable job of doing it.  You do see the seams there and you certainly sense that you’re looking at a special effect while he’s on screen (Captain Marvel remains the gold standard for this technology, at least until I get a look at The Irishman), but technologically it’s acceptable.  What’s less acceptable is Will Smith’s performance in these scenes. As the older version of the character Smith is basically doing a variation on what he usually does when he’s in relatively somber movies and he’s fine at it, but he really doesn’t seem to know what to do when playing the younger version and never finds the right voice or find an interesting way to turn down his usual confidence.  The movie also doesn’t do anything wildly interesting thematically with this setup beyond what giving older Will Smith some really under-developed “regrets” and giving younger Will Smith some lame daddy issues with his creator.  Otherwise the whole thing is totally cookie cutter.  Some of the action scenes are impressive, in part because they’re being given a lot of extra punch by the 3D, but some of them are a lot less effective than others.

On some level I’m glad that Ang Lee is using this nothing of a film in order to act as a guinea pig for his technological experimentation rather than applying it to a movie with real potential for which it would largely be a distraction, but what I really want is for him to stop pretending he’s James Cameron and get back to making small movies about emotions.  That or maybe make an action movie with more of a human touch like Crouching Tiger, Hidden Dragon, because with or without technical wizardry Gemini Man is plainly beneath him.  Actually it’s beneath a lot of people; the screenplay has apparently been bouncing around Hollywood since the late 90s and it does feel kind of dated as a result.  It’s one of a lot of spy movies from the 2000s that used rogue fictional spy agencies as the villains because they couldn’t find an international enemy of interest at the time and also didn’t quite have the balls to suggest that the actual CIA might be evil.  In general its conception of how espionage works is idiosyncratic; too ridiculous to claim any sort of realism but not fantastical enough to be particularly fun.  It’s also got some really bad on-the-nose dialogue and boring characters.  I’d normally implore people to not waste their time on such a movie until it’s on HBO or something, but I can’t this time because the only real reason to see this thing at all is because of the visuals and how they play out in 120 FPS 3D and I suspect from the trailer that the movie’s going to kind of look like crap in any other format.  So if and only if you’re curious about the tech give the movie a look if you can do so cheaply, otherwise just skip it.