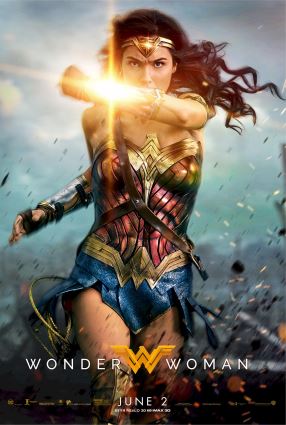 For someone who doesn’t read a whole lot of comic books I know a whole lot about Batman.  I know the origin stories of just about everyone in his rogues gallery, I can name a lot of the most famous storylines from his comic book run, and I know more about his adopted family than anyone should.  I also know a decent number of things about Superman, but after that my knowledge of DC’s roster of superheroes becomes pretty thin.  I can’t tell you much about The Flash other than that he’s fast, or about Aquaman other than that everyone thinks he’s a joke, and I couldn’t tell you much of anything about The Green Lantern aside from what was in that crappy Ryan Reynolds movie.  The character that I feel particularly ill-informed about is Wonder Woman.  Wonder Woman is certainly a very famous creation, but in many ways she seems to be more famous as an iconic symbol than as an actual character.  Most people could identify her on sight but how many of them would know that she’s an Amazon who’s directly related to Zeus and that she’s spent much of her life in an unending fight with Ares?  Probably a lot fewer than the number of people who know that Superman came from Krypton or that Batman’s parents were shot.  Of course part of that information gap is caused by the fact that the character had not been brought to the big screen before now, fortunately that’s being corrected by the new big screen adaptation of the character’s adventures in this year’s Wonder Woman.

The film begins by establishing Diana “Wonder Woman” Prince’s origin story, in which she was raised on Themyscira, an island in the Aegean that’s been hidden from the outside world and seemingly displaced in time through magic.  It’s explained that this island is the domain of the Amazons, a group of female warriors that were created by Zeus to temper the humans or something.  Anyway, Diana (Gal Gadot) is seemingly the only one of these warriors who began as a child and was raised on the island by her mother Queen Hippolyta (Connie Nielsen) and  her aunt General Antiope (Robin Wright).  There are some argument over whether Diane will be trained as a warrior but for the most part it’s an idyllic life, until suddenly bi-plane comes flying past the invisibility barrier of the island revealing that these events are actually occurring circa 1918 and crashes into the water.  This plane is piloted by an American spy working with the SAS named Steve Trevor (Chris Pine) who is being chased by a fleet of German boats.  After a brief skirmish Trevor tells the island ladies that World War I has been going on around them.  Diana determines that this is the doing of the Amazons’ nemesis Ares and resolves to venture out with Trevor to find and kill Ares, believing that this will end the war and bring peace to Earth.

It’s no secret that Wonder Woman is coming hot off the heels of a number of DC movies that made a lot of money but which were reviled by fans and critics.  Personally I liked some of them better than most.  I liked and continue to like Man of Steel a lot more than most people and I thought Suicide Squad had its moments (Batman V. Superman: Dawn of Justice, however, is every bit as terrible as everyone says), but either way it’s clear that there is a lot of pressure for DC to change direction in a number of ways and to do that they seem to have taken some cues from Marvel in certain places.  The film’s “superhero in World War I” set up is certainly reminiscent of Captain America: The First Avenger and while in human society Diana has some fish-out-of-water misunderstandings that reminded me a bit of the first Thor movie.  However it would be a mistake to say that the film is completely biting the Marvel style, in fact a lot of the film’s comedy is confined to the second act and much of the rest of the film actually has a lot more in common with the other DC films than critics have suggested.  In fact I think the film has quite a bit in common with Man of Steel in that both movies are about these incredibly strong and in certain ways alien beings trying to come to terms with what their potential place in human society is.  Additionally a lot of the film’s action scenes are definitely pulling from the Zack Snyder playbook with 300 style speed ramping and a grittier aesthetic over all.  In many ways Suicide Squad was probably the bigger departure from the other DC films.

As origin stories go Wonder Woman works out pretty well.  The comic book origin story for Wonder Woman is kind of “out there” and lacks the cleanness of something like “was bitten by a radioactive spider” and the movie does a pretty good job of conveying the whole “Amazons on an island” story without making it seem unnecessarily complicated.  There are of course certain plotholes that this opens up.  I do not for the life of me understand how time works on this island or how they managed to learn all sorts of modern foreign languages while still being so oblivious of modern world that they don’t know the First World War is going on around them.  The cloak of invisibility around the island also doesn’t exactly make sense as the reason they’ve been isolated for so long.  These are of course pretty minor quibbles in the long run.  The movie also does a pretty good job of indulging some of its more comedic elements without feeling like a cavalcade of one-liners and pop culture references or feeling too much like a departure from the feel of the other movies of the “Justice League” continuity and while the actions scenes certainly aren’t “top of the line” they are mostly pretty entertaining.

All told Wonder Woman is a movie that does a pretty good job of living up to the basic expectations of a modern superhero movie and here or there it adds some nice flairs of its own on top of that but it’s hardly a major genre re-invention.  For the most part this is a movie that follows the usual rules of superhero filmmaking pretty closely, and there’s nothing wrong with that exactly, I generally like superhero movies after all.  However, I can’t help but be a little disappointed that the movie plays things as safe as it does.  I generally go to DC’s movies expecting a little more experimentation than this.  We certainly got that with Suicide Squad even if the results were kind of a mess and Man of Steel also sought to show us a different kind of superhero movie from what we usually get.  This movie on the other hand just kind of feels like a safer and more diluted version of what DC has done before and I suspect that a lot of the people who were less open-minded about what they were doing before will find that to be a good thing but I personally found that a little disappointing.