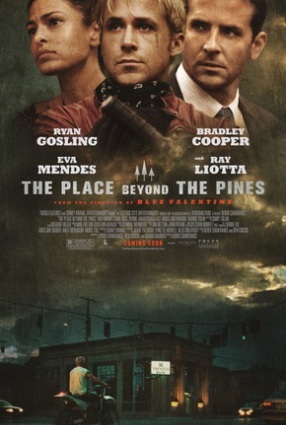 Ryan Gosling first came onto the scene in a romantic film called The Notebook, a film which quietly became a huge hit with female audiences and sparked the trend of nearly identical Nicholas Sparks adaptations.  The film was kind of like what Titanic would have been if it had never tried to appeal to anyone outside of the “teenage girls swooning over Leo” demographic.  And like Leonardo DiCaprio before him, Ryan Gosling had done pretty much everything in his power to distance himself from that teeny-bopper image since that success.  Since The Notebook, Gostling has played a crack smoking teacher, a dude with a creepy sex toy fixation, a corrupt political advisor, and an escape driver who stomps peoples’ skulls in.  One of his best anti-Notebook roles was in the film Blue Valentine, where he plays a man who’s in a decisively non-fairy tale and borderline abusive relationship.  That was the debut film of a talented director named Derek Cianfrance who’s reteamed with Gostling for his follow-up film, gritty crime thriller called The Place Beyond the Pines.

The film begins somewhere in the late 80s or early 90s in Schenectady, New York (a city whose name, when translated from Iroquois, means “the place beyond the pines”) and focuses on a man named Luke Glanton (Ryan Gosling), who is in town as part of a touring motorcycle stunt show on the county-fair circuit.  Glanton uses his stop to re-connect with a woman named Romina (Eva Mendes), with whom he’d had a fling a year or so earlier, and discovers that she’d recently had his baby.  Suddenly overcome with concern, Glanton quits his job and moves into Schenectady, but Romina has already started a new life with a man named Kofi (Mahershala Ali) and may not have any room for Glanton in her family.  Looking for a way to support Romina, Glanton decides to team up with a local scoundrel named Robin Van Der Zee (Ben Mendelsohn) to rob some local banks, which goes well initially but he soon finds the heat headed in his direction.

The film’s plot, as described above, has all the ingredients for a serviceable in not overly original Sundance film, but The Place Beyond the Pines has grander ambitions than that and goes off into unexpected directions at about the midway point.  I’m not going to give away the film’s twist except to say it sort of turns into a different film at this point which maybe isn’t the one that people expected to see.  As I watched the film I nearly certain that what I was watching had to be an adaptation of a novel, possibly one by Dennis Lehane or George Pelecanos, and I was absolutely shocked when the credits rolled and only saw Derek Cianfrance, Ben Coccio, and Darius Marder credited for an original screenplay.  That’s crazy.  This kind of sprawling yarn with notable pivots in story trajection is the opposite of the conventional screenplay formula and I suspect it will be off-putting to some.  Most people say they don’t want all their films to be predictable, but the truth is a lot of people do tend to punish movies that don’t follow the patterns they expect them to follow.  I found the film’s twist bold and interesting.  I was with it for a while, but then the film takes yet another turn that proved less fruitful and I’ll leave it at that.

The Place Beyond the Pines was allegedly made for $15 million dollars but it definitely looks more expensive than that.  Well, maybe it doesn’t.  Derek Cianfrance is certainly working with a larger cast and has produced some bigger set-pieces, but he’s maintained Blue Valentine’s grainy and intimate visual style.  This captures the film’s dingy locations pretty well and also gives a sense of economic realism to the whole film.  The drawback is that it makes it all the more jarring when the plot takes a turn for the not-so-literally-realistic in its final third.  In fact it’s that final third in general that holds this film back from greatness, and yes, this film does flirt with greatness before it eventually lets itself down.  This is the kind of film that I want to love: it’s got epic ambitions and is well executed for much of its runtime, but in the end it just bites off a little more than it can chew.  I’m definitely still recommending the film for all that it does right in the first two thirds, and even for a couple of nice moments in its back third, but I must say that I was pretty frustrated when I finally saw where the film was going.